WILMINGTON, Mass., Sept. 21, 2020 /PRNewswire/ -- The No. 9 UniFirst Chevrolet Camaro ZL1 1LE, driven by NASCAR's most popular driver, Chase Elliott, will make its third and final appearance of the 2020 season at the South Point 400 on Sunday, September 27, at Las Vegas Motor Speedway in Las Vegas, Nevada. The fourth race of the Cup Series playoffs will begin at 7 p.m. EST and will be televised on NBC Sports Network (NBCSN). 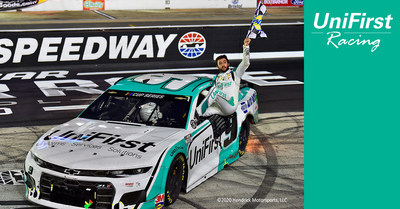 Elliott last piloted the No. 9 UniFirst Chevy at the NASCAR All-Star Race at Bristol Motor Speedway in July, taking home the checkered flag and the $1 million grand prize. Prior to that, the UniFirst Chevrolet made its 2020 debut on March 8 at Phoenix Raceway, with Elliott starting from the pole position and leading 93 laps en route to a top-10 finish.

Elliott completed the best regular season of his NASCAR Cup Series career in 2020, earning wins at Charlotte on May 28 and the DAYTONA Road Course on August 16, in addition to his win at the All-Star Race exhibition at Bristol. He ultimately finished the regular season with six stage wins and 10 top-five finishes. Elliott is currently placed fifth in the NASCAR Cup Series playoff standings with 3,021 points as the series heads to Las Vegas to kick off the Round of 12.

"We're looking forward to getting the UniFirst Chevy back on track at Las Vegas," Elliott said. "Vegas is a track that that went pretty well for us earlier this season. Obviously, a lot has changed since then, but we're ready to go. With this race being the first in the Round of 12, it's important that we run well and get the green and white UniFirst Chevy up front on Sunday."

The South Point 400 serves as the fourth race of the NASCAR Cup Series playoffs and the first race in the Round of 12. Elliott led 70 laps and picked up two stage wins during his last visit to Las Vegas Motor Speedway in February. And, in 2019, he collected a fourth-place finish in September and a ninth-place result in March at the 1.5 mile track.

"Chase has provided UniFirst – our 14,000 employee Team Partners and our two million uniform wearers – with so much excitement during the entire 2020 campaign," said Adam Soreff, director of marketing and communications for UniFirst. "It's only appropriate that our partnership culminates with this key postseason race. We can't wait to see what Chase has in store this Sunday while piloting our No. 9 UniFirst Chevy."

About UniFirst
Headquartered in Wilmington, Mass., UniFirst Corporation (NYSE: UNF) is a North American leader in the supply and servicing of uniform and workwear programs, as well as the delivery of facility service programs. Together with its subsidiaries, the company also provides first aid and safety products, and manages specialized garment programs for the cleanroom and nuclear industries. UniFirst manufactures its own branded workwear, protective clothing, and floorcare products; and with 260 service locations, over 300,000 customer locations, and 14,000 employee Team Partners, the company outfits more than 2 million workers each business day. For more information, contact UniFirst at 800.455.7654 or visit UniFirst.com.